What Is A Micromanager And How To Deal With One ?

What Is A Micromanager And How To Deal With One ?

A micromanager has a hard time letting go of control and entrusting team members to carry out projects on their own. It’s like the workplace version of the helicopter parent, only the ones experiencing stifled independence are adult employees, not children.

By contrast, the most effective managers strike the right balance between employee oversight and autonomy. They believe in the abilities of their employees and give them a long leash to make decisions on their own. The oversight and feedback that they provide are intended to create a business environment in which work gets done efficiently and effectively.

What Is a Micromanager? 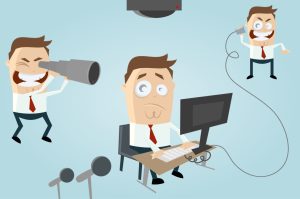 Giving regular feedback doesn’t make someone a micromanager. The job of a leader, after all, is to ensure all team members are aligned on outcomes. But when the manager feels compelled to express an opinion at every stage and wishes to maintain excessive control over the most minuscule detail, this person has a micromanagement issue.

Micromanagers may have good intentions. They wish to succeed and finish a project well. Yet, their nit-picky or over-bearing management style often drives their employees crazy and causes high-stress levels. Micromanaging is an ineffective leadership style.

If this is the case and you must work under a micromanager, here are 8 situations and ways to take control of the situation:

1. When the Manager Insists on Making All the Decisions

A manager who feels compelled to exercise complete control over a team asserts that power by taking on the role of the sole decision-maker. But this means that the person making decisions is one step removed from those involved in amassing the information needed.

Having to retrace all the background steps and details to allow the boss to arrive at a decision takes up valuable time.

Increase communication so that the manager feels kept in the loop. Offer up the arguments that back up any choice that the team agrees on as the best decision while downplaying a not-so-desirable choice. Then, let the manager believe that they provided input when they select the more reasonable of the two choices.

2. When the Manager Becomes Overly Involved in Team Members’ Work

Here, the problem lies in a focus on inconsequential details instead of the big picture, which is where effective company leadership puts its attention.

This could be a sign that the position and the manager are a mismatch. Or, it’s possible that the manager is new to the supervisory role and is unsure how to shift from the responsibilities of a team member to those of a manager.

Model the organizational style that the manager should adopt. Suggest an assignment chart that delineates who will be responsible for each task.

Purposely include the manager’s roles associated with facilitating the project’s completion, such as providing the necessary resources to make the work go smoothly, paving the way for the work to be given priority with upper management, and bringing in a consultant to fill any skills gaps, etc. Be sure to include who approves what along with a timeline.

3. When the Founder Won’t Turn Over the Reins

Micromanaging is a trait often displayed in founders of startup organizations. This arises from the company’s evolution, beginning with the founder as the sole employee and progressing into bringing in specialized staff to take the company to the next level.

But if the founder can’t give up control, it presents a barrier to scaling the business. Placing this burden on the company’s growth may be one of the reasons that 90 percent of startups fail.[1]

To counteract the founder’s need for control, show your worth by solving a problem that showcases your expertise.

For example, if you’ve been hired as the comptroller, share an intuitive, interactive software program that will keep all the financial information up-to-date and accessible, freeing up the founder to take on leadership tasks.

4. When the Boss Avoids Delegating Tasks

When the manager avoids delegating tasks, it could be a sign that they are under intense stress to perform from their higher-ups. They could be acting out of fear of failure or not delivering a project on time. Research has shown that “when leaders buckle under pressure, it doesn’t just hurt their influence, it also hurts their teams.”[2]

Read their body language for signs of escalating stress. Explore ways to calm their anxiety. Break down a process for improving the team’s efficiency, and share it with them.

Without pointing fingers, use a “from-to” chart to display the difference between the current micromanaged practice and the more streamlined way to do work with less manager involvement.

5. When Employees Aren’t Allowed to Fix Their Own Mistakes

Allowing mistakes and providing opportunities to learn from them make for a trusting environment where innovation can happen. But managers who lack confidence tend to raise their own self-esteem when they’re able to step in and fix an issue themselves.

Unfortunately, this only makes things worse for the team members in the long run, as they won’t be able to learn from their mistakes to allow themselves to grow. Making mistakes and having the opportunity to fix them allow us to learn from our failures and reflect on ourselves and our actions.

Bring the issue of learning to the forefront by asking the manager what you can do differently in the future to avoid making similar mistakes. Display that you don’t fear mistakes but intend to turn them into occasions for growth and discovery.

6. When Employees Are Given Little to No Autonomy

Bosses who watch over every employee’s arrival and departure time each day, dictate every task, look over shoulders, and want to review every draft have crossed the line in exerting authority. No one works well when the manager is always there, monitoring every move.

Demonstrate your integrity by not using work time to make personal phone calls, engage in internet searches, or socialize with coworkers.

Show up to meetings on time and prepared. Put in 100 percent effort. When you show yourself as a model employee—always delivering on what you promise on time—your boss will trust that you don’t need to be watched over.

7. When Employees Are Required to Give Constant Updates

Managers who demand to be kept constantly in the loop suffer from FOMO—fear of missing out. This mindset will alienate them from their teams who find little value in the frequent requests to share progress.

Try to be forthcoming in sharing updates while, at the same time, not elaborating or giving the manager cause for further probing.

If you’re engaged in a task that an interruption would compromise, let your manager know that you’re on top of things, that you can’t step away at the moment, and that you’ll check in once time allows. At that point, ask forthright how often the manager wishes you to share updates and try to find a workable compromise.

8. When Employees Must Conform to Perfectionism

Alongside perfectionism is the expectation to do things only in the way that the manager prefers. This could be the assertive style that allowed them to arrive at this position, but it can make team members miserable.

Moreover, perfectionism can make the manager miserable as well, which negatively affects the team as a whole. Research has shown that “high rates of perfectionism, especially self-oriented perfectionism can lead to significant mental health consequences, such as depression, general anxiety, socially-specific anxiety, lower life satisfaction, and feelings of low self-worth.”[3]

Have a one-on-one meeting with your manager to clarify and align with their expectations. Don’t be afraid to share what will allow you to succeed, including creating opportunities that allow for others’ input and the sharing of new ideas.

The key to handling a micromanager is to avoid feeling mistrusted, undermined, or resentful, and focus instead on alleviating your supervisor’s stress, lack of self-esteem, or control issues. Realize that the problem lies with them and not you. It’s their psychological issue and not a reflection of your work output.

Focus on open communication to diffuse lack of trust or fears of failure. Remain positive and non-confrontational. Ask for guidance pre-emptively. Help your manager to understand that you both are working toward the same goals and outcome—to deliver your best work as a team.